This time around we're going to look at an useful aspect of the new colorization tools in Dynamo. Namely, colorization of topographies in Dynamo. It still demands the conversion from Revit topography to surfaces in dynamo, but still, it's quite efficient.

The need for a tool that can give a visual representation of slopes in revit was asked for by Shrikant Heerekar in this thread over at the Dynamo forum. And both me and Vikram Subbaiah responded with quite similar methods, although Subbaiah developed a far more concise and stringent definition by using designscript. Be sure to check out his website here.

I'm gonna show you a little bit of both.

First up is a node based definition. (It includes the Mesh.FaceVertices node from the Clockwork package.)

As we can see, it's quite simple, and we can edit the colors to our own liking. Notice that the sensitivity slider adjust how little slope a single surface must have to "qualify" as green.

EDIT! I forgot to mention that you will have to turn of preview of the original surfaces for the colors to be visible. It's a known bug and they will fix this in future releases.

The next one is a codeblock/designscript based version which is based, or rather directly ripped of, Vikram Subbaiah's version except I have pulled out some parameters. 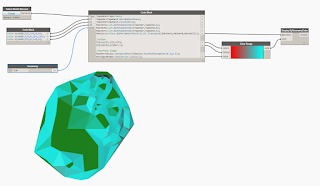 Last, a version that sends all the surfaces into Revit and override the elements color in a specific Revit view. This has to be used with great caution otherwise the head BIM manager in the project will cut off your head as the script generate one import instance pr surface. That's a lot of instances! But at least then you're able to put it on sheets etc.

so that's basically it. Here is a screencast for anyone into bad english pronounciation.

If anyone have other great ideas for using this, let me know!

Building positioning by using Optimo, anyone? :)